The death of Officer Jacai Colson
by Arlene Wallis March 17, 2016

It was a case of mistaken identity.  They did not recognize one of their own. These are words you never want to hear when an officer is gunned down.  The chaotic events that happened this month that took the life of 28 year old Jacai Colson is heartbreaking but nothing new.  Three brothers decided on death by cop that day and stormed the Prince George’s County Police Headquarters, one with a gun while the other two filmed it.  That Sunday was far from quiet.

He was doing his job dressed in plain clothes he went into action when he heard gunfire.  I am sure that everyone’s mind shifted into “get the one with the gun” mode. Though his actions were valiant, they were not enough to save his life.  The police chief called it a deliberate shooting, I have a real problem with that statement.  How do you deliberately shoot your fellow officer?  Another family in Baltimore experienced the same fate when their son, William Torbit Jr., was undercover, dressed in plain clothes, badge showing at a Baltimore nightclub when a fight broke out.  Five officers shot into the crowd.  He pleaded and they still fired, not knowing it was one of their own. 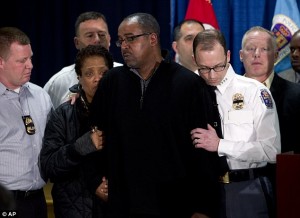 I guess my point is this; with all that has been going on especially in law enforcement, we want you to be vigilant but we want you to be watchful as well.  Apparently you need to get to know everyone in your precincts and familiarize yourself with all aspects of your department.  Too many have died needlessly in the line of duty in the past month.  We appreciate all you do.

When Reality hits, what do you do?

Sisterly Yours with Lady Blue

Baltimore based blogger who focuses on the positive, motivation and uplifting of others locally, nationally and global. With an infectous smile, she brings calm and joy when she writes and also makes you think when you read her blogs. Single mom of four who is also a domestic violence survivor, she brings a unique view on the things that are often left unsaid. Lady Blue also keeps tabs on the underground music movement happening in Baltimore and around the world. If you need motivation, she also has a inspirational page on Facebook as well! Her favorite bible verse is also the title of her website because she knows that weeping may endure for a night but JOY does come in the morning!
No Comment
Hi Fi Graphics $30!