We are not going to do the same old thing for Black History Month.  We need to dig a little deeper and discover those that have helped shape who we are today and the nation we live in.  You know the usual, now lets get to the nitty gritty of it all shall we?  There is no need to rewrite what is already written so I will pull from the words already written that have given our ancestors their credibility and their mark in history. 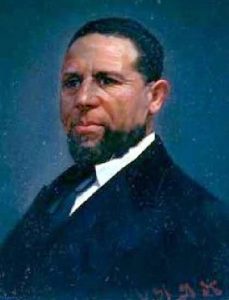 Hiram R. Revels was born on September 27, 1827 t0 free parents in Fayetteville, North Carolina. Revels was a minister who, in 1870, became the first African-American United States senator, representing the state of Mississippi. He served for a year before leaving to become the president of a historically black college.  He was a minister in the African Methodist Episcopal Church, a Republican politician, and college administrator. Born free in North Carolina, he later lived and worked in Ohio, where he voted before the Civil War.  His father worked as a Baptist preacher, and his mother was of Scottish descent. He claimed his ancestors “as far back as my knowledge extends, were free,” and, in addition to his Scottish background, he was rumored to be of mixed African and Croatan Indian lineage. In an era when educating black children was illegal in North Carolina, Revels attended a school taught by a free black woman and worked a few years as a barber. In 1844, he moved north to complete his education. Revels attended the Beech Grove Quaker Seminary in Liberty, Indiana, and the Darke County Seminary for black students, in Ohio. In 1845, Revels was ordained in the African Methodist Episcopal (AME) Church. His first pastorate was likely in Richmond, Indiana, where he was elected an elder to the AME Indiana Conference in 1849. In the early 1850s, Revels married Phoebe A. Bass, a free black woman from Ohio, and they had six daughters.

With his moderate political orientation and oratorical skills honed from years as a preacher, Revels filled a vacant seat in the United States Senate in 1870. Just before the Senate agreed to admit a black man to its ranks on February 25, Republican Senator Charles Sumner of Massachusetts sized up the importance of the moment: “All men are created equal, says the great Declaration,” Sumner roared, “and now a great act attests this verity. Today we make the Declaration a reality…. The Declaration was only half established by Independence. The greatest duty remained behind. In assuring the equal rights of all we complete the work.”

Read his story in its entirety at http://history.house.gov/People/Listing/R/REVELS,-Hiram-Rhodes-(R000166)/

The Dumbest Sh*t in The History of Dumb sh*t!