Michael Brown’s mother Lesley McSpadden doesn’t beat around the bush when it comes to her son’s killer Darren Wilson. When asked about Wilson she proceeded to say,  “The devil. That’s what... 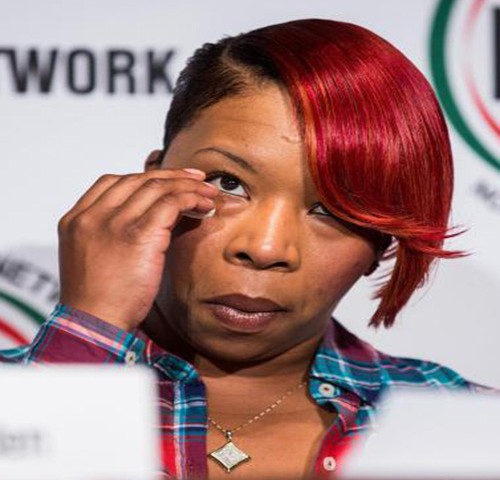 NEW YORK, NY - APRIL 08: Lesley McSpadden, mother of Michael Brown- who was shot to death by a police officer - speaks on a panel titled "The Impact of Police Brutality - The Victims Speak" at the National Action Network (NAN) national convention on April 8, 2015 in New York City. Reverend Al Sharpton founded NAN in 1991; the convention hosted various politicians, organizers and religious leaders to talk about the nation's most pressing issues. (Photo by Andrew Burton/Getty Images)
by D Queen August 7, 2015

Michael Brown’s mother Lesley McSpadden doesn’t beat around the bush when it comes to her son’s killer Darren Wilson. When asked about Wilson she proceeded to say,

“The devil. That’s what comes to mind.”She proceeded to call him “evil” and “a waste of space.”

“All I can say is vengeance is God’s, and I hope He has mercy on his soul.”

McSpadden was responding to Wilson’s comments in his feature from the latest issue of the New Yorker. In the article, Wilson spoke in depth about his views on race and his experiences as a White cop in the predominantly Black neighborhoods of Jennings and Ferguson, MI. Wilson boldly censured Brown for his upbringing and insinuated that Brown, as well as many other young people in his neighborhood, were involved with gangs and unmotivated to live productive, upwardly-mobile lifestyles.

McSpadden responded back to Wilson, calling the disgraced police officer oblivious and cowardly.

“He can’t hurt me with his words. What he did last year hurt me really bad, so his words mean nothing to me. He wouldn’t even admit what he did was wrong. He wouldn’t admit he had no reason to do what he did. He’s cold and malicious. I’ll never forgive him.”

McSpadden went on to speak about the local riots following her son’s death, saying it was unfortunate, yet to be expected.

“It was a cry for help. It was like we had a tsunami or a Hurricane Katrina, but it was killings after killings…This killing, in the broad daylight, middle of the day, with people out walking their dogs and jogging and playing, and this erupts, and we don’t have any understanding to why it happened. No facts. Yeah, that was bound to happen.”

The sad part about all of this is that Michael Brown wasn’t the first and sure won’t be the last young black male robbed of his future due to ignorant trigger happy police. Just think of all the lives we have lost since the murder of Michael Brown. It is so sad and even though the Federal Government is now becoming involved in the investigations most of the time the outcome is still for the most part the same. Noone is being held accountable for these heinous crimes against our people. They are just being swept under the rug until he next incident. Something has got to change!